Hello, I am stuck on Code Challenge Stage 3: Create Navigation With Lists. I keep receiving the following error message "Bummer! The Portfolio list item should link to "index.html"." Here is my code:

Here is my screenshot 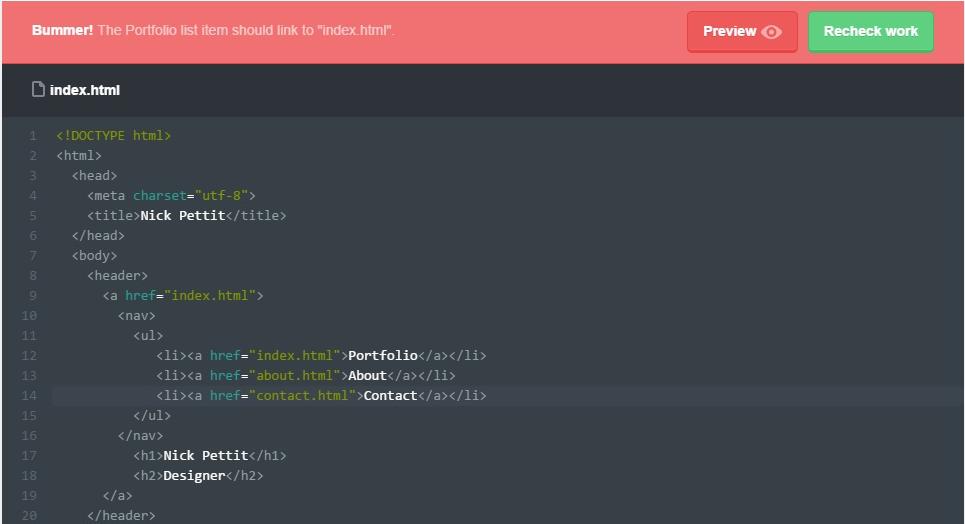 Any advice?
Thank you, Isaac

It looks like you have your nav in the <a href="index.html"> of your ``header tag. Instead, it should be placed just below the close of your anchor tag that follows your headline tags but before the close your header tag.

Isaac, it looks like you have everything wrapped in another anchor tag. What happens if you remove the content from line 9 and 19?

Wow man, unwrapped it and its fixed. That was simple. Thank you!!!

So, I had a lot of trouble with this question too. For anyone else in the future, I want to post what helped me.

The question says to put the <nav> "after the link". So for me, I put it right after the link before the <h1> and <h2>. I was looking at it literally.

However, what I learned is that "after the link" really means after the end of the anchor tag, so really you shouldn't put your <nav> until after the </a> tag which ISN'T right after the website, it's actually after those headers.

I hope that helps someone else.