Workspaces is LIVE! -- A New Way to Code on Treehouse

We’ve released a brand new tool this week called Workspaces! It's been added as a main nav item. We created Workspaces so you can easily build and save projects side by side with Treehouse content.

We have a ton of new courses planned that will have Workspaces integrated in to them, the first of which is already available!

The whole team is really excited to see how everyone uses it to learn new tricks and grow your skills!

Here’s a few highlights of what you’ll be able to do with Workspaces:

Fork existing Workspaces from your list, or even from inside the editor 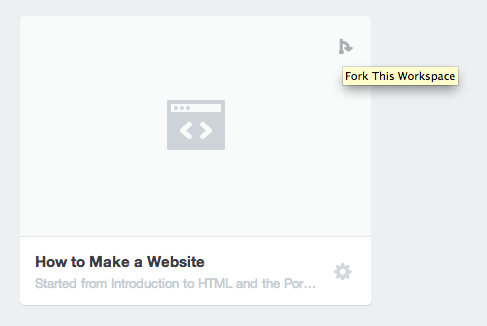 Live previews of your Workspace while you are working on it 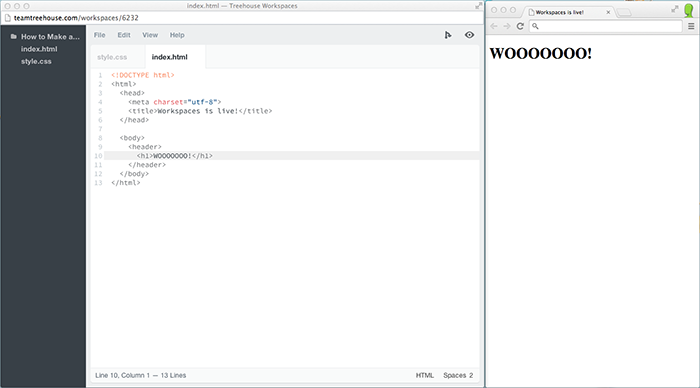 Any plans to make workspaces available within the Treehouse iPad app?

cool! can't wait to try them out.

Looking forward to try it out

Ugh, why do you always have to be such a boner James Barnett....

Projects don't save correctly, through sometime code is disappear from files, before exiting all turns is saved. Need fix this.

Copying in Jim Hoskins to look into this. Sorry!

We're looking into this. We've had a couple instance of this, and opening the workspace again, the files show up. Tracking down the cause of this now.

What a great idea, you guys rock!

It's been great so far; I'm looking forward to the features that'll be released in the future for it, especially when it comes to preprocessors.

how to enable live preview?? i tried using live preview but it just doesn't work. i need to refresh my browser first to see the updated one.

raja nusantara, to clarify -- the preview doesn't automatically update for you, you still have to refresh the tab.

It's less of a live preview and more of a run code feature.

What is the difference between this and codepen ? I do not get the need.

It's basically a cloud text editor, it allows you develop on Workspaces instead of on your computer.

It's a lot closer to cloud9 and plunker then it is to codepen.

Personally, it depends on how comfortable you are having lesson-related content litter your CodePen account unless you have a Pro account (I had one until today; have to wait a while before renewing. I haven't used it as often as I would want to since you can't use Sass 3.3 or import Sass libraries like SassMeister allows you to); especially if you know you'll do that over and over again trying to learn.

Workspaces also allows you to have a more organized structure mirroring the material you'll be able to finish using it via the courses since it allows you to create folders and use relative paths. CodePen allows you to upload assets, but you have very limited control on how to structure things from there. and have features more catered to experimentation, and showcasing work to others (via Professor mode and so on).

Having folders also allows Workspaces to feel more like a true local environment, which is extremely useful towards you learning how to code, in my opinion.

Thanks Kevin for the explanation I was a bit lost on how to best used it.

This is a great feature for use to use on the site, nice work.

Just wondering, could we use Sass on this tool.

No preprocessors are currently supported.

We're working on this :)

Any ETA on this feature? I'm making the assumption that workspaces will become a full blown web based text editor with all the bells and whistles over time, but this one particular feature will be loverly to see come to fruition soon :-)

Big fan of this new add on!!

Wow it looks cool. Just found a new way to code at school!

ITS AMAZING!!!!! i have projects all the time in tech classes that need websites. now i know what i'm doing during school! :)

I'm impressed. I was actually hoping a feature like this would be added.

At first I thought that Workspaces was going to be a feature that newcomers to Treehouse would use. A tool that was quick and easy to set up and work with, but didn't have a whole lot of powerful features. Something to use until you get your hands on a real text editor like TextMate or Sublime or Notepad++.

But after playing around with it for a few minutes, I came to realize something. Workspaces is a real text editor.

First of all, it's cloud-based. I can edit code from anywhere, without having to stop and sync files and move stuff around.

Because of that, (I'm hoping that) any work I do in Workspaces will be fairly easy to share with others. If I'm working on a potential design in just some basic HTML and (S)CSS for a friend's website, I can just email them a link to it. No more screenshots!

Also, it's pretty feature-rich, especially for a web editor. It's got code completion (which works pretty well, actually) and it has a lot of shortcuts and tools for managing code (indentation, rearrangement, etc.), both of which I didn't know about for awhile after I got into web development.

Of course, I'd like to see more languages supported, especially Sass/SCSS. I'd also be really happy if server-side languages were supported (PHP/WordPress, Ruby/Rails, etc.), but I completely would understand if such a thing were impossible. Support for Git would also be pretty cool. All that lies in the future, though (as the original post says), and I'm plenty content to wait it out.

Great addition, Treehouse! Keep it up!

I love the workspaces. They are very helpful and allow me to code the projects without needing to get a text editor and it has a lot of the Sublime Text features that I always wanted but I don't have $70 to spend on a code editor at this time. I feel fancy now, lol.

May I make a suggestion. My only issue is that when you launch a workspace, it opens up a totally new browser window. Personally, I don't like to have too many windows. I would like for it to open up in a separate tab instead. If I had dual monitors then this wouldn't be an issue. Most of the time when I am on Treehouse, I am on my laptop and when it pops up on a separate window, I have to then click and drag it into the window I was primarily using. When you do decide to update it, if you could maybe put in an option for the user to select whether they want to open in a new tab or window before they launch the workspace, that would be awesome.

Veronica Newman When you go to launch a workspace, you can right click and choose "open link in new tab" to do what you're requesting. Hope that helps!

It's a very capable text editor, and I like it a lot, but I just reopened a workspace to find that nothing saved. The files were gone. I haven't seen anyone else mention entire files disappearing, although one person did mention some code not saving. Not sure where they went, but clearly, we need to have projects save correctly. Has anyone else experienced this?

Wow, very sorry. We've heard a few reports of this, and in most cases the files come back next time you open the workspace. It's a big issue we're trying to figure out, but it's happening extremely infrequently (way under 1%) so it's a bit difficult for us to track down. I'll be looking at your case as well to see if it can help us prevent this in the future.

Sorry about that, and thanks for letting us know.

There's a few bugs, but honestly, the system is phenomenal. You guys have really done an amazing job. I just wanted to make you aware that file loss is something that can happen as of right now. I got curious and experimented with it, making some very basic things, and noticed that the files didn't return when I came back. If I see anything else, I'll let you guys know. Thanks for making a great tool with so much potential!

yea thanks for bringing that up! I had the same problem!! The first time i just reopened it and it was back but after a few more hours of coding my workspace was reduced to just the first bits of code i started with. Sucks because thats a few hours of coding work lost. Otherwise it's an amazing system but not if you can't use it.

There's a few bugs, but honestly, the system is phenomenal. You guys have really done an amazing job. I just wanted to make you aware that file loss is something that can happen as of right now. I got curious and experimented with it, making some very basic things, and noticed that the files didn't return when I came back. If I see anything else, I'll let you guys know. Thanks for making a great tool with so much potential!

This was supposed to be a comment on your response. That didn't work, so ignore this one.

There are a few things that don`t work for me:

Just to let you guys know to fix it, besides that it's looking good so far!

Seriously though ... what shortcuts have you tried that did work?

I'm curious what you think a text editor must be able to do in order to be considered working.

Those key combos should work, could you let us know what OS and browser you use? Are other shortcuts working?

Awesome, this definitely adds a great value to sign up with Treehouse. Less expense in getting an editor.

Do the url's of a preview change or are they per workspace ? For example http://web.ulva5f1392.treehouse-app.com/

I ask because I was wondering what the views are on asking someone for their preview url when they are talking about a hard to track down issue.

The preview urls are per workspace, but right now they will only work while you have the Workspace open, so the case you mention right now would only be useful while talking with someone live. We are working on ways to share and collaborate on workspaces right now, we just want to make sure everything is stable and works well.

Best text editor I've used and I've used A LOT of them! Wish you could release a desktop version with theme support.

treehouse can you make an app for workspace. offline editing will be good