I can't figure out what the correct Markdown syntax for ordered lists are. Often times when I try, it will collapse and instead of being in nice rows, it will all be one single, paragraph.

Edit: Nevermind, in making this post, I learned the correct syntax:

Thanks guys! Let me know if I can help by giving more feedback or with general questions.

I'd tried ordered lists in an earlier post and could not get it to work. 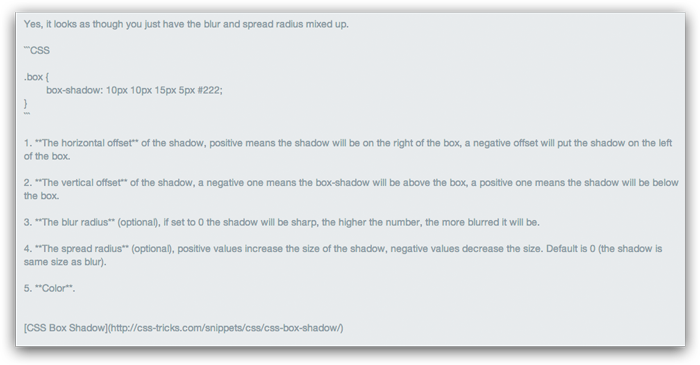 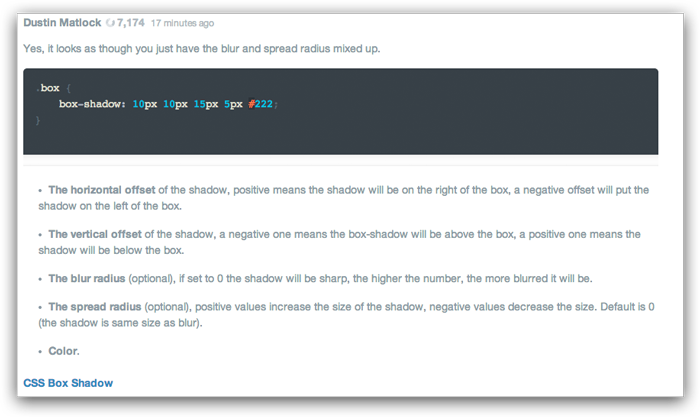 Not sure what I'm doing wrong in that but I'd agree with some of your other suggestions. Thanks for posting this.

Hey Dustin Matlock I think the [return] space between each order item screwed up the output. Testing this now:

This is what I posted, the output is above. Made me look like a fool!

I don't understand it either but you obviously did it before. I have a support request for this. Maybe there's something missing or possibly a bug we don't know about.

Those are all great ideas, while Treehouse is working on these here are some things we can do on the forum to help each other out.

Thanks James Barnett, I already actively use CodePen and I bookmarked dillinger.io.

Content tags are great for referring to other questions posted about the same video but there isn't a way to go directly to the challenge or video they're referring to. Let me illustrate an example:

Sorry for how long this was – I really want to illustrate how difficult this process can be, and how confusing a simple UI element like that play button can be. Let me know if I'm being extraordinarily nitpicky (after all I spent a good 15 minutes on this).

I agree — the tags do seem to give the idea that you may be taken to a video or challenge. There is however something that is correct most times.

Not sure what's going on with the Markdown editor, but take a look at this screenshot of [dillinger.io(http://www.dillinger.io). 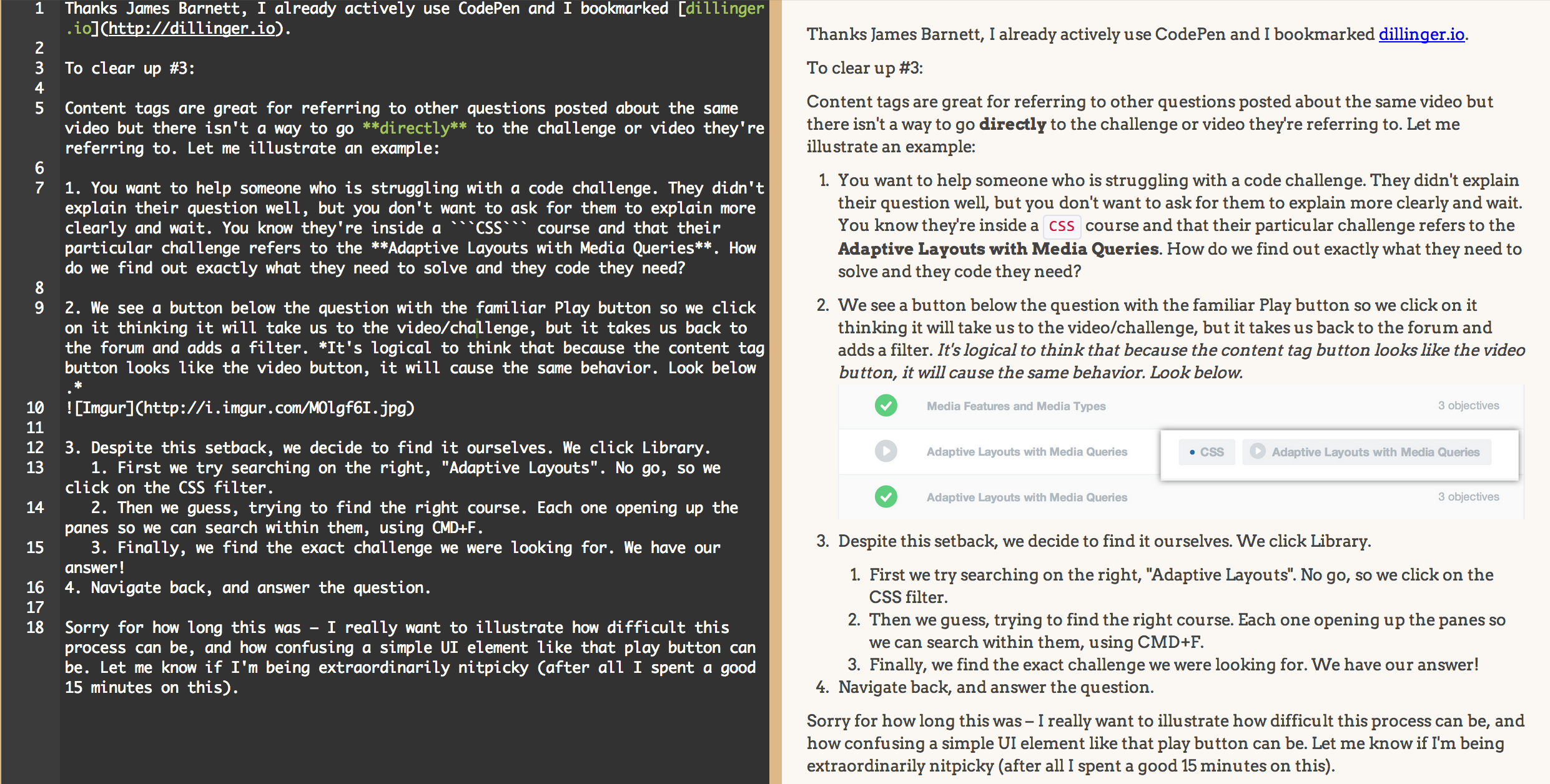 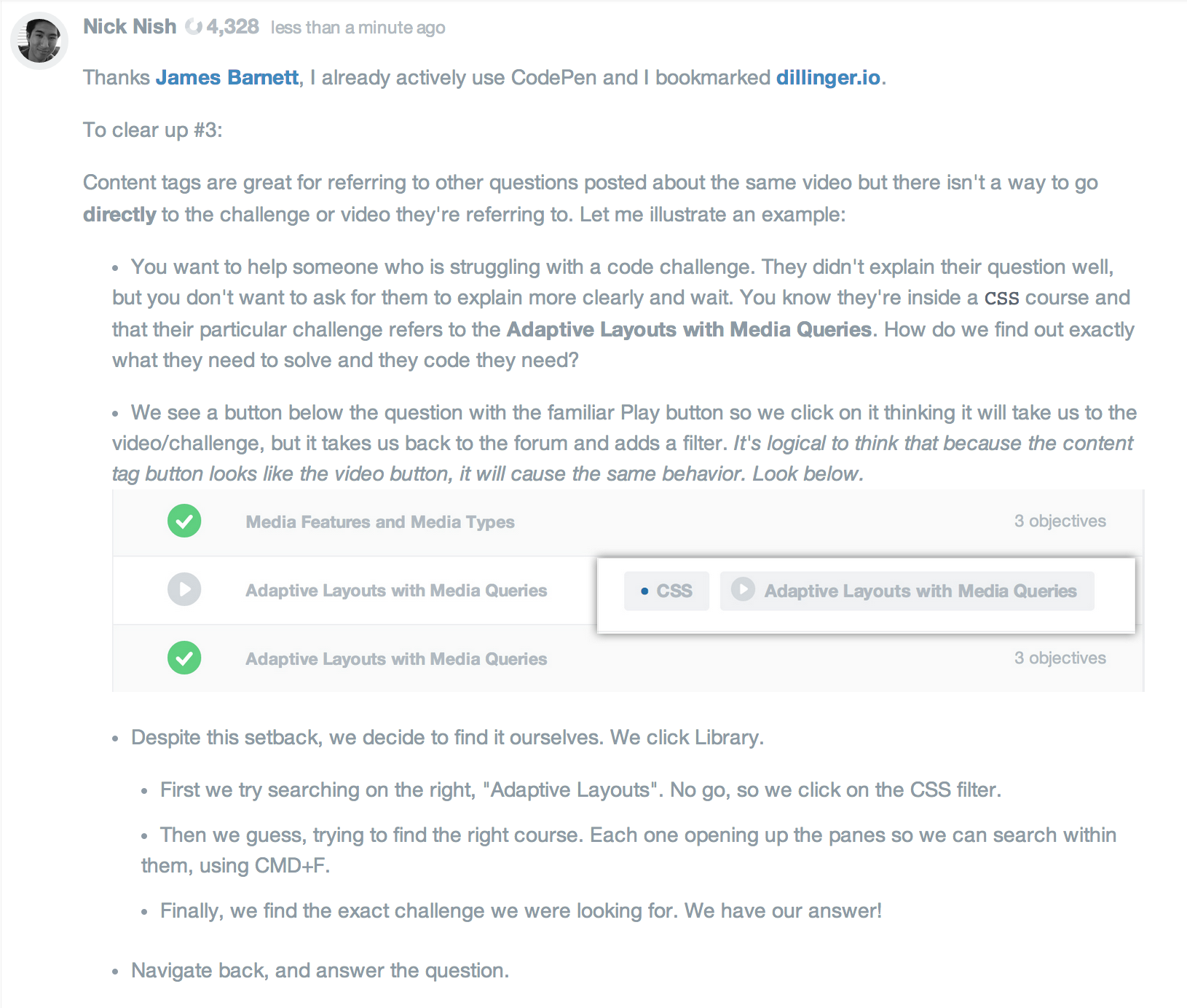 > Not sure what's going on with the Markdown editor, but take a look at this screenshot

Looks fine to me, can you be more specific. Maybe annotate your screenshot.

James Barnett the outputs are starkly different. It's a little tough to see because the second screen is so large, but the same Markdown was an Ordered list in Dillinger.io and an Unordered list in Treehouse, giving my original concern validity.

That's most likely the bug we were talking about earlier. I have a support request open, so if anyone is interested I can provide an update on that. In addition to the ordered list issue, I'm also having trouble getting breakpoints to work, say, between headings.

It'd also be nice to see block/quoted material have some sort of styling.

Dave McFarland wrote Posting Code to the Forum. Maybe he could chime in on how to get it working.