If the backslash is followed by a special character, then the character following the backslash is parsed as it is in that location. This is the one we'll be using to show a dollar sign or a quote. Let's jump into workspaces and see how this affects our string.

Escaped Characters: if the string is enclosed in double-quotes ("), PHP will interpret more escape sequences for special characters: 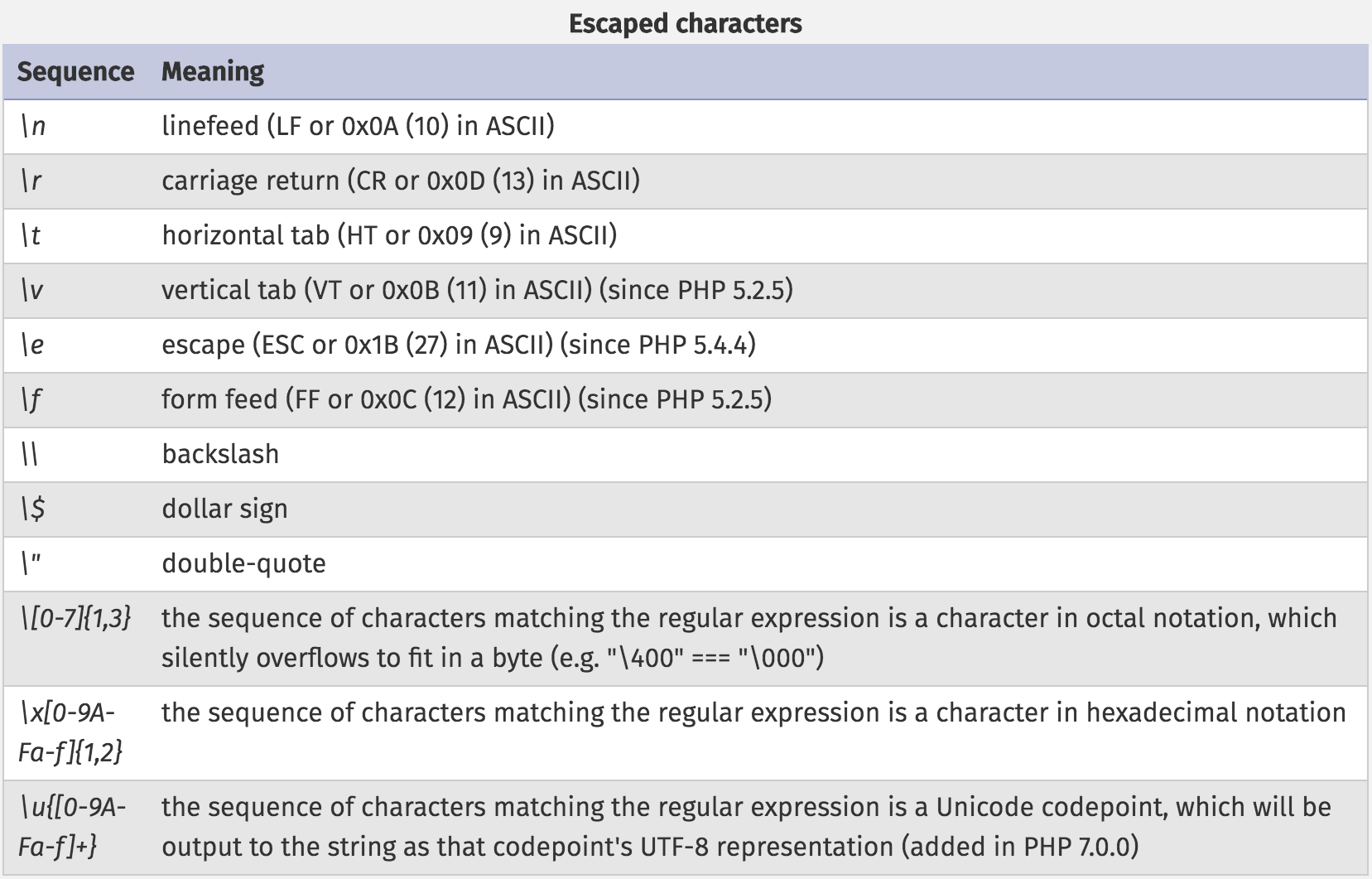 Sign up
We've looked at how PHP interprets variables, within a string. 0:00
If we use double quotes, the value will be displayed instead of the variable name. 0:04
What happens if we want to add a dollar sign symbol to our string as well? 0:09
Can we do that with double quotes? 0:14
And speaking of quotes. 0:16
How do we add quotes to our string? 0:17
We'll be using something known as an escape sequence 0:19
because they break out of the way PHP would normally interpret the string. 0:22
Escape sequences begin with the escape character backslash. 0:28
And are used to signify that the character after the escape character should be 0:32
treated specially. 0:36
There are two types of escape sequences. 0:39
If the backslash is followed by an alphanumeric character. 0:41
The entire escape sequence including the backslash is given a meaning. 0:45
For example, \n will give you a new line and \t will give you a tab. 0:50
If the backslash is followed by a special character, 0:57
then the character following the backslash is parsed as it is in that location. 1:00
This is the one we'll be using to show a dollar sign or a quote. 1:06
Let's jump into work spaces and see how this affects our string. 1:10
Currently, our string is surrounded by double quotes. 1:14
So, the variable is expanded and we see the value instead of the variable name. 1:17
The first thing we'll look at, is what happens when I add the escape character 1:23
backslash before the dollar sign. 1:26
And now run the script again. 1:31
Once again, the actual variable name is displayed instead of its value. 1:34
That's because the escape character tells the PHP interpreter 1:39
that the next character should be treated specially. 1:43
Because the next character is a special character, 1:46
that special character should be parsed as it is in that location. 1:48
So instead of treating the dollar sign as the start of a variable, 1:53
the PHP interpreter parses it as an actual dollar sign. 1:57
Now let's say instead of just Hello Alena, I wanna give a little more context and say 2:02
learning to display hello Alena to the screen. 2:07
Let's also remove this escape character, now let's run the script. 2:16
I get an error because PHP reaches the second quote and 2:23
assumes that this is the end of the string. 2:26
I could surround that string with a single quote on the outside. 2:29
And this time when I run it, the string displays. 2:36
The script will run because the quotes are nested properly. 2:40
Meaning the single quotes are on the outside and 2:43
the double quotes are on the inside. 2:46
However, this doesn't work like I want because I see the variable name 2:48
instead of the value again. 2:52
Even though my variable is within these inner double quotes. 2:55
How the string is parsed is determined by the outside quotes, 2:58
so I need my outer quotes to be double quotes. 3:03
Then I use the escape character before these double quotes. 3:08
And this tells the PHP interpreter that the next 3:12
special character should be parsed as it is in that location. 3:15
Now let's run the script again. 3:21
It works like I want with the correct quotations and the variable value. 3:24
Before I escape, let me demonstrate using an alphanumeric escape sequence. 3:30
This line in the console would be much easier to read, 3:36
if it didn't run into the next command prompt. 3:39
I'd like to add a new line to the end of my string, 3:42
I can do that by adding the escape sequence \n. 3:45
\n stands for a new line and now when I run my script. 3:49
The command prompt is on the next line in my string is much easier to read. 3:55
Escape sequences are primarily only for double quoted strings, 4:01
since single quoted strings interpret each character individually. 4:06
The one place you would use an escape sequence 4:10
is to include a single quote within a single quoted string. 4:13
Like adding apostrophe s to the end of a word. 4:16
There are many more escape sequences and other ways to create a string. 4:20
So, be sure to check the teacher's notes for more information. 4:24